SO KOKO | Life Topics | Falling off the Soundcloud 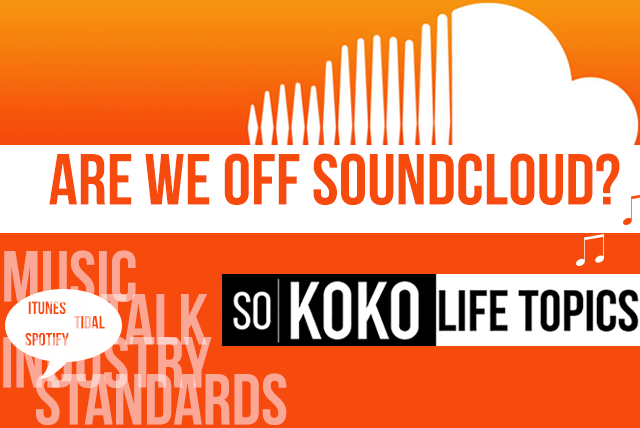 You bunch of ingrates!

As a first point of business, SO KOKO is on Soundcloud follow us .Now that's done, let's move on to an interesting, slightly lengthy, slightly delicate SO KOKO Life topic.

Disclaimer : Soundcloud did not commission the following post. But since we paying you a tremendous compliment you may want to p....

As we partly cover music on our blog, we thought it was in your interest and in our duty to have this conversation. We note how a  number of you flock to our Song Of the Week Posts, Video of the weeks and the more topical music posts like Why UK Afrobeats needs to be dropped for good. So if  you don't take anything from this post (rude), thank you for the views!

Focusing on the Afrobeats/ Afroswing /World Music, Alternative , whatever you want to call it, the standard protocol was to place your music on Soundcloud - It has an array of listeners, it's free for both parties. You don't need to have an account so the accessibility really has no limits.

But Artists, while you're looking to eat, did you not just bite the hand that fed you?


Soundcloud may not have said, 'Here Artist,  take 1 million pounds',  but it's a platform that has enabled you to get 1 million plays on your music. Whether that's 1 million people playing it once or 1 person playing it a million times. Soundcloud has been even gracious enough to hide the fact that half those plays might have come from you ( we know, you know , WE know!)

It's all a numbers game but that don't mean Soundcloud don't count.

Now those plays may or may not have helped convince me to buy a £20 ticket to your show. ( you know this is headline show season, so yes your show, your pocket). It would have also helped aid negotiating that £350-£750 rate you nabbed for performing, helped generate that word on the street that may or may not have pushed radio plays (PRS money) and shows overseas.

So why are you off it? why are you hesitant to put your music on a platform that helped put YOU on?


If soundcloud is stopping your money, preview the audio on your videos too then! Give us 30 seconds of audio and make us watch the additional 4 minutes in silence.